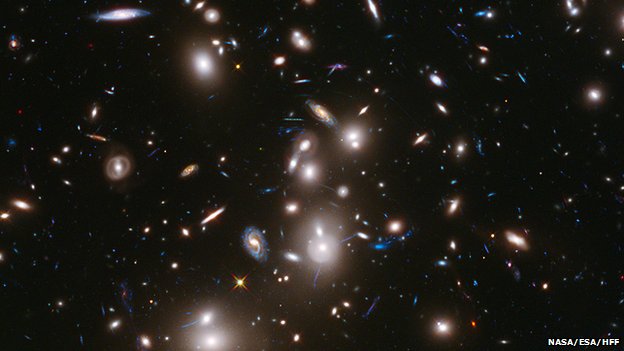 The blue arcs are distant galaxies whose faint images are magnified by a massive cluster in the foreground.

The “deepest ever” image of a group of galaxies – “Pandora’s Cluster” – has been captured by the Hubble Space Telescope.The blue arcs in the picture are distant galaxies as they appeared 12 billion years ago – not long after the Big Bang.

The hidden objects are revealed through the “magnifying lens” of the cluster Abell 2744. The image was unveiled at the 223rd meeting of the American Astronomical Society (AAS) in Washington DC. It is the first in a set of super-deep views of the Universe taken by Hubble’s Frontier Fields observing programme, and published on the Arxiv preprint server.

In the foreground are the colourful spirals and elliptical galaxies of Abell 2744, a massive cluster in the constellation Sculptor.

It is nicknamed Pandora for its strange and violent formation history, which unleashed many new phenomena to astronomers. 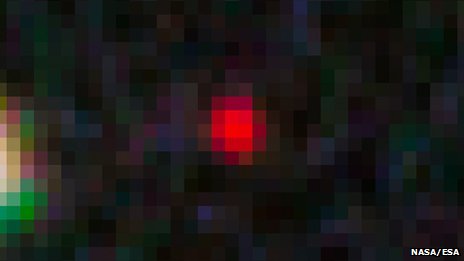 One of the earliest galaxies ever seen – as it appeared 13.2 billion years ago

Abell’s immense gravity acts as a lens to warp, brighten and magnify more distant objects lurking in the background. The long exposure by Hubble reveals almost 3,000 of these background galaxies, interwoven with hundreds in the foreground.

The faintest is 10-20 times fainter than any galaxy ever seen before. They appear brighter thanks to the lensing phenomenon, but are also smeared, stretched and duplicated – like faces in a funhouse mirror. The remarkable photograph will be combined with images from Nasa’s Spitzer telescope and Chandra X-ray Observatory to give new insights into the origin of galaxies and their accompanying black holes. It was one of three spectacular new findings by Hubble unveiled at the AAS conference.

Four brilliant young galaxies have been pictured as they were 13.2 billion years ago – just 500 million years after the Big Bang. The brightest was forming stars 50 times faster than our Milky Way does today, but is only one twentieth the size. 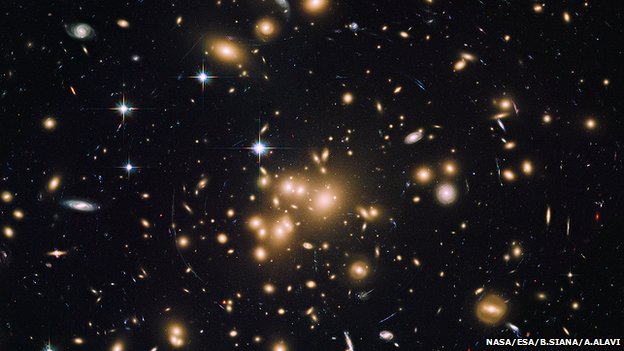 Read the rest of this article here