Last Friday and Saturday night Excision set up show in Times Square’s well-known den of bass, Best Buy Theater. The Canadian dubstep juggernaut brought his huge Executioner Tour to the Big Apple and bass-heads were definitely out in full force. With a state of the art sound system, beautiful and spacious interior, and excellent staff, Best Buy Theater is certainly one of New York’s best venues. On Saturday night, the theater was transformed into a war zone as it was overrun with ravers clad in kandi and neon lights.

Excision always brings a diehard crew of fans who religiously attend his face-melting shows covered from head to toe in funky Transformers and Excision themed memorabilia. As I made my way through the crowds of multi-colored rave kids, I took a moment to appreciate just how huge the scene has grown here in the States. There are many who critique the EDM culture in America and a lot of it is well-founded criticism, but there’s nothing like showing up at a show in New York City and feeling the electricity in the air. Even though I’m starting to get a bit long in the tooth, I’m still addicted to that energy, and that’s why I keep coming back to these shows.

As soon as I stepped out onto the dance floor at Best Buy, I knew this was going to be a wild event. ill.Gates was the first artist who I caught, and I was intrigued after hearing so much about him. He threw down a well-composed and surprisingly cerebral set that showed off his ability to incorporate many genres. His hour-long set fused Miami bass music, hip-hop,moombahton, dubstep, and trap into an exceptionally riveting performance. As the dance floor became more of a Decepticon mosh-pit, I sought refuge towards the back of the venue where the stadium seating gives you an awesome view of the stage. I found myself at the edge of my seat as ill.Gates began to create some live production right in front of the audience. As he built the beat from the ground up, a camera was fixed on ill.Gates’ quick hands and production equipment. The entire Best Buy Theater erupted in excitement as the live produced beat coalesced in front of our eyes resulting in a one-of-a-kind experience.

After ill.Gates educated the crowd on the intricacies of electronic music it was time to get DIRTY with Parisian bass music collective Dirtyphonics. Although only half of their roster was present for the performance, Dirtyphonics brought ample energy to their set. As soon as the dirty duo hit the stage, the energy level in the theater went through the roof.  Dirtyphonics unleashed their reckless brand of blistering drum & bass, which sliced though the crowd like electronic cleaver. The two dropped a slew of bangers off of their latest release Irreverent, including “No Stopping Us,” “Stage Divers,” and the biggest drop of their relentless set “Dirty.” Dirtyphonics definitely had the crowd raging hard, and towards the end of their set, the two emerged from behind their decks with super-soakers to cool off the sweating masses and then stage-dived into the newly drenched crowd. Before they left the stage one of the Dirtyphonics members grabbed the mic and yelled “Now that was f**ng DIRTY!” to which the audience responded to with jubilant cries of appreciation. 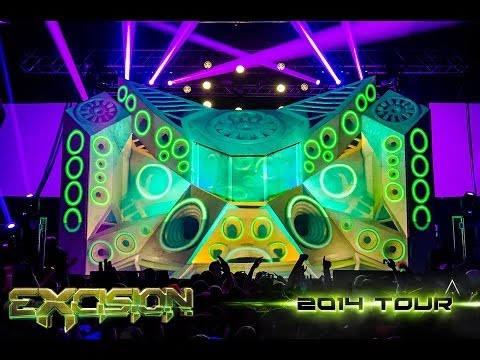 After a brief intermission, finally it was time for the man himself to hit the stage. As the lights dimmed, the crowd noise started to reach incredible heights and there was only one thing that everyone wanted, Excision. Once the lasers hit the stage, a black curtain fell, revealing the massive Executioner stage in all of its unbelievable glory. I’ve seen a lot of DJs and a lot of crazy stage set ups, but the Executioner stage is seriously an awe-inspiring marvel. The entire stage was engulfed by this huge wall of lights and colors, and the images created the illusion that the audience was hurtling through space towards Earth. As the projections on the Executioner stage began to morph and shift into X’s and Destroid symbols, the unmistakable sound of metallic bass growls started to churn from the 100,000 watts of PK sound. The low rumble that filled the Best Buy Theater was profound and could only be the handiwork of one man.

Suddenly a window opened up in the center of the gargantuan wall of lights and lasers revealing Excision spinning within a small alcove. As the crowd was blasted by smoke machines, the bass dropped with mind-blowing intensity barreling through the audience like a machine gun through tissue paper. The dance floor exploded into a sea of anarchy and everyone in the crowd raised their X’s high in the air. Excision proceeded to melt faces with pounding dubstep, playing some crowd favorites like “Raise Your Fist” and “Crowd Control.” I was shocked to hear him drop “All Is Fair In Love And Brostep,” one of Skrillex’s  tunes from his smash new album, Recess. After an hour of heavy dubstep, Excision switched things up, interspersing a few electro, trap, hard style, and drum & bass tracks to throw some curve balls at the bass-hungry crowd. This was definitely one of Excision’s more varied sets that I’ve caught, and I was pleasantly surprised to see him venture into new sounds without sacrificing his heavy metal influences. The entire night I was captivated by the amazing Executioner stage; it truly felt like a separate performer holding its own show.

With all the time and effort that Excision puts into his live performances and the performances of his super group Destroid, it’s clear that he is focused on revolutionizing the way we experience live electronic music. If you have never seen Excision live for yourself, catch his 2014 tour before time runs out, trust me you’ll be happy you did.