Despite its unassuming appearance, the edge-on spiral galaxy captured in the left half of this NASA/ESA Hubble Space Telescope image is actually quite remarkable.

Located about one billion light-years away in the constellation of Eridanus, this striking galaxy — known as LO95 0313-192 — has a spiral shape similar to that of the Milky Way. It has a large central bulge, and arms speckled with brightly glowing gas mottled by thick lanes of dark dust. Its companion, sitting in the right of the frame, is known rather unpoetically as [LOY2001] J031549.8-190623.

Jets, outbursts of superheated gas moving at close to the speed of light, have long been associated with the cores of giant elliptical galaxies, and galaxies in the process of merging. However, in an unexpected discovery, astronomers found LO95 0313-192, even though it is a spiral galaxy, to have intense radio jets spewing out from its center. The galaxy appears to have two more regions that are also strongly emitting in the radio part of the spectrum, making it even rarer still.

The discovery of these giant jets in 2003 — not visible in this image, but indicated in this earlier Hubble composite — has been followed by the unearthing of a further three spiral galaxies containing radio-emitting jets in recent years. This growing class of unusual spirals continues to raise significant questions about how jets are produced within galaxies, and how they are thrown out into the cosmos.

Hubble Sees Monstrous Cloud Boomerang Back to our Galaxy

Hubble Space Telescope astronomers are finding that the old adage “what goes up must come down” even applies to an immense cloud of hydrogen gas outside our Milky Way galaxy. The invisible cloud is plummeting toward our galaxy at nearly 700,000 miles per hour. 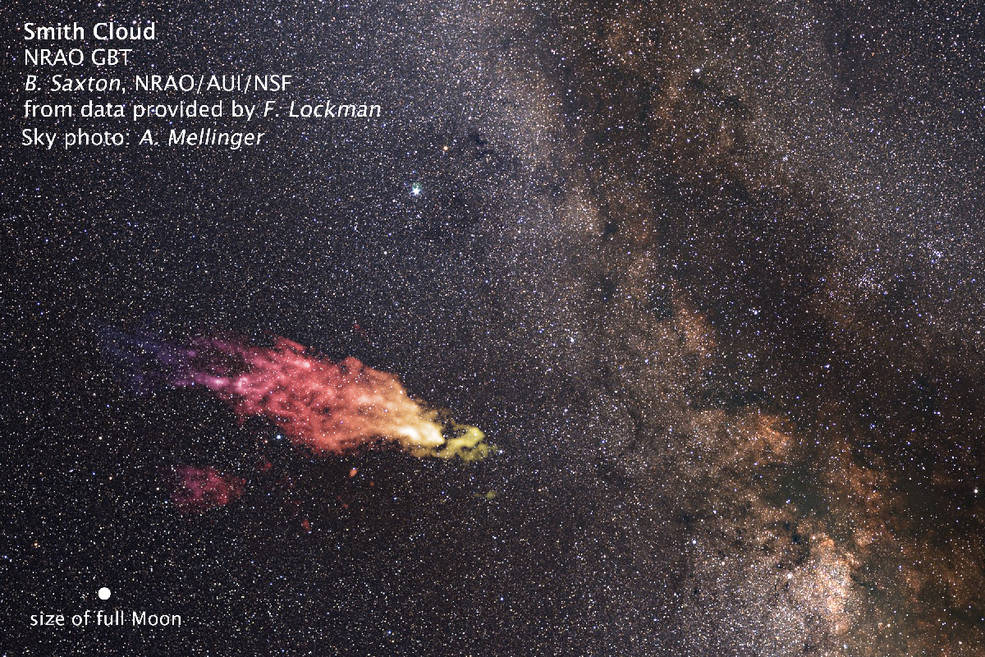 This composite image shows the size and location of the Smith Cloud on the sky. The cloud appears in false-color, radio wavelengths as observed by the Green Bank Telescope in West Virginia. The visible-light image of the background star field shows the cloud’s location in the direction of the constellation Aquila.
Credits: Saxton/Lockman/NRAO/AUI/NSF/Mellinger

Though hundreds of enormous, high-velocity gas clouds whiz around the outskirts of our galaxy, this so-called “Smith Cloud” is unique because its trajectory is well known. New Hubble observations suggest it was launched from the outer regions of the galactic disk, around 70 million years ago. The cloud was discovered in the early 1960s by doctoral astronomy student Gail Smith, who detected the radio waves emitted by its hydrogen.

The cloud is on a return collision course and is expected to plow into the Milky Way’s disk in about 30 million years. When it does, astronomers believe it will ignite a spectacular burst of star formation, perhaps providing enough gas to make 2 million suns. 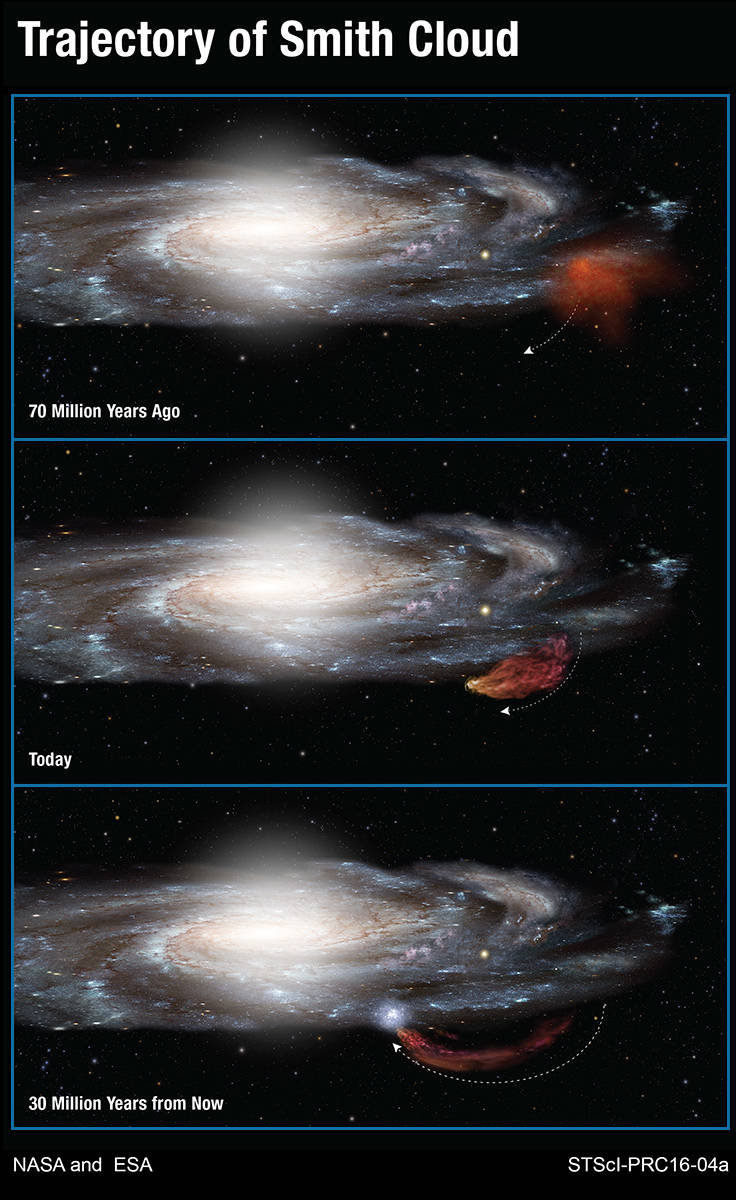 This diagram shows the 100-million-year-long trajectory of the Smith Cloud as it arcs out of the plane of our Milky Way galaxy and then returns like a boomerang. Hubble Space Telescope measurements show that the cloud came out of a region near the edge of the galaxy’s disk of stars 70 million years ago. The cloud is now stretched into the shape of a comet by gravity and gas pressure. Following a ballistic path, the cloud will fall back into the disk and trigger new star formation 30 million years from now.
Credits: NASA/ESA/A. Feild (STScI)

“The cloud is an example of how the galaxy is changing with time,” explained team leader Andrew Fox of the Space Telescope Science Institute in Baltimore, Maryland. “It’s telling us that the Milky Way is a bubbling, very active place where gas can be thrown out of one part of the disk and then return back down into another.

“Our galaxy is recycling its gas through clouds, the Smith Cloud being one example, and will form stars in different places than before. Hubble’s measurements of the Smith Cloud are helping us to visualize how active the disks of galaxies are,” Fox said.

Astronomers have measured this comet-shaped region of gas to be 11,000 light-years long and 2,500 light-years across. If the cloud could be seen in visible light, it would span the sky with an apparent diameter 30 times greater than the size of the full moon.

Astronomers long thought that the Smith Cloud might be a failed, starless galaxy, or gas falling into the Milky Way from intergalactic space. If either of these scenarios proved true, the cloud would contain mainly hydrogen and helium, not the heavier elements made by stars. But if it came from within the galaxy, it would contain more of the elements found within our sun. 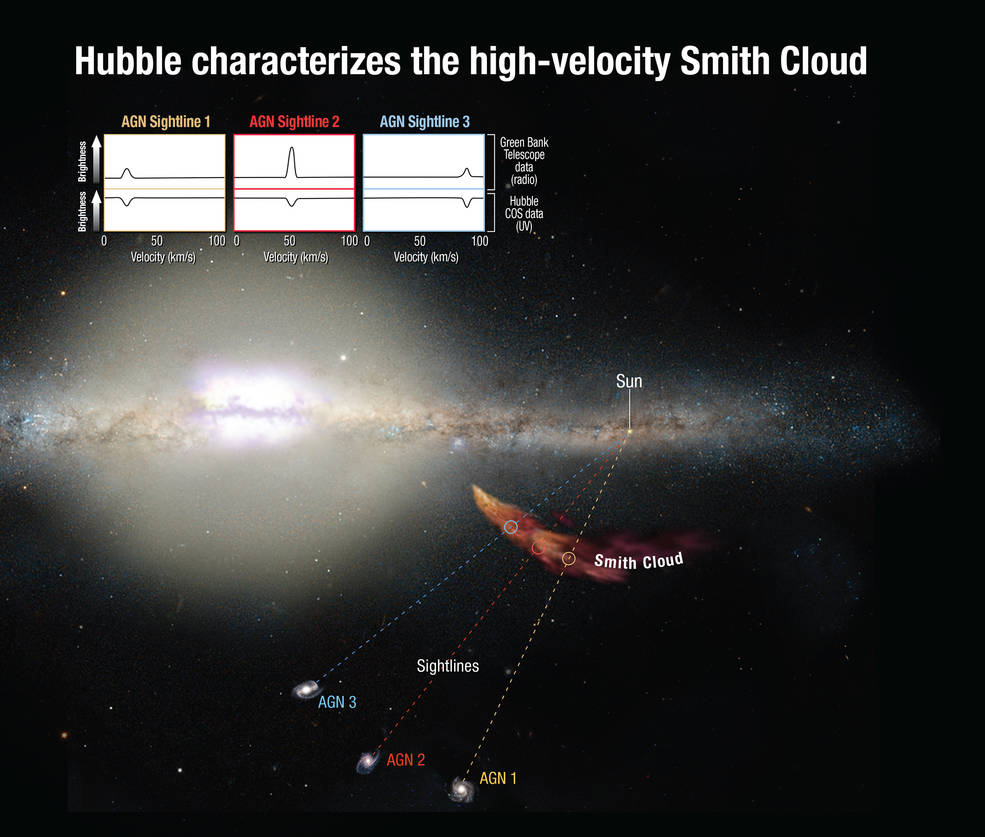 Hubble’s Cosmic Origins Spectrograph can measure how the light from distant background objects is affected as it passes through the cloud, yielding clues to the chemical composition of the cloud. Astronomers trace the cloud’s origin to the disk of our Milky Way. Combined ultraviolet and radio observations correlate to the cloud’s infall velocities, providing solid evidence that the spectral features link to the cloud’s dynamics.
Credits: NASA/ESA/A. Feild (STScI)

The team used Hubble to measure the Smith Cloud’s chemical composition for the first time, to determine where it came from. They observed the ultraviolet light from the bright cores of three active galaxies that reside billions of light-years beyond the cloud. Using Hubble’s Cosmic Origins Spectrograph, they measured how this light filters through the cloud.

In particular, they looked for sulfur in the cloud, which can absorb ultraviolet light. “By measuring sulfur, you can learn how enriched in sulfur atoms the cloud is compared to the sun,” Fox explained. Sulfur is a good gauge of how many heavier elements reside in the cloud.

The astronomers found that the Smith Cloud is as rich in sulfur as the Milky Way’s outer disk, a region about 40,000 light-years from the galaxy’s center (about 15,000 light-years farther out than our sun and solar system). This means that the Smith Cloud was enriched by material from stars. This would not happen if it were pristine hydrogen from outside the galaxy, or if it were the remnant of a failed galaxy devoid of stars. Instead, the cloud appears to have been ejected from within the Milky Way and is now boomeranging back.

Though this settles the mystery of the Smith Cloud’s origin, it raises new questions: How did the cloud get to where it is now? What calamitous event could have catapulted it from the Milky Way’s disk, and how did it remain intact? Could it be a region of dark matter — an invisible form of matter — that passed through the disk and captured Milky Way gas? The answers may be found in future research.

The team’s research appears in the Jan. 1, 2016, issue of The Astrophysical Journal Letters.

The Hubble Space Telescope is a project of international cooperation between NASA and the European Space Agency. NASA’s Goddard Space Flight Center in Greenbelt, Maryland, manages the telescope. The Space Telescope Science Institute (STScI) in Baltimore, Maryland, conducts Hubble science operations. STScI is operated for NASA by the Association of Universities for Research in Astronomy in Washington, D.C.

For images and more information about the Smith Cloud and Hubble, visit: