It has been a snowy winter in the Northeast and it looks like mother nature is not going to let up. This coming weekend the Northeast has the two storms heading towards it one on Saturday and one on Sunday. If these two storms merge the snowfall rates could be legendary.

The timing of the storm as it travels from the Rockies and Southwest is Saturday to Sunday over the Central states and Sunday to Monday in the East.

The upcoming storm could be the most intense, and correspondingly the most disruptive, of the recent barrage especially as the storm nears and moves along the Atlantic coast.

This is provided the storm does not have competition with another storm nearby.

The snow this weekend could affect major hubs in the East, such as New York City, Philadelphia, Washington and Boston into Monday’s morning commute. 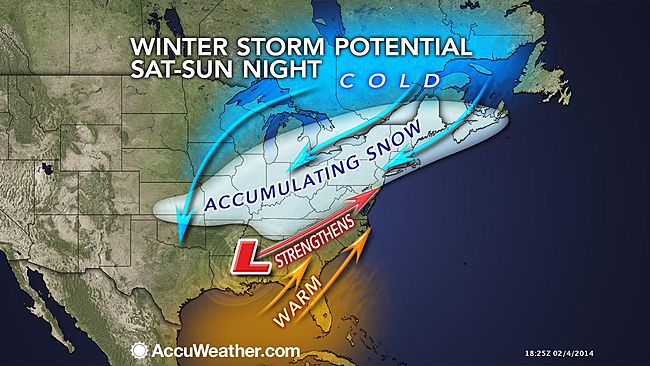 One scenario suggests the storm may develop into a blizzard as it nears the Atlantic Ocean. As a result, people from Virginia to Maine will need to watch this one carefully.

If the storm develops to its full potential along the mid-Atlantic coast, it may deliver not only snowfall rates of several inches per hour to inland areas of the Northeast, but also strong winds. 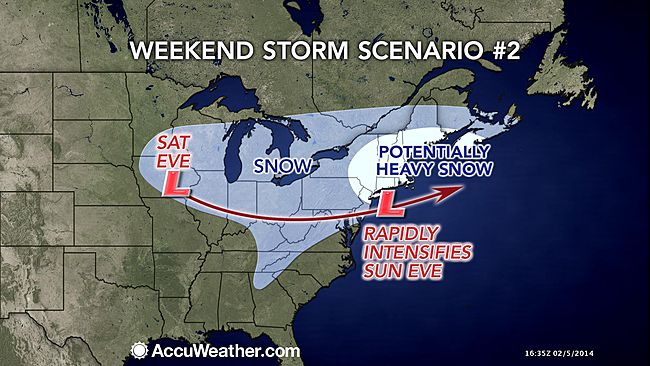 Another scenario would be for the storm to behave more like other storms have done recently with a period of light to moderate snow streaking across part of the Midwest to part of the Northeast. Winds would be significantly less and probably not a factor.

Supporting this less intense storm idea on Sunday to Monday is a front-running and weaker storm that will roll across the South on Friday night with rain showers and then could brush the Northeast on Saturday with a swath of snow. 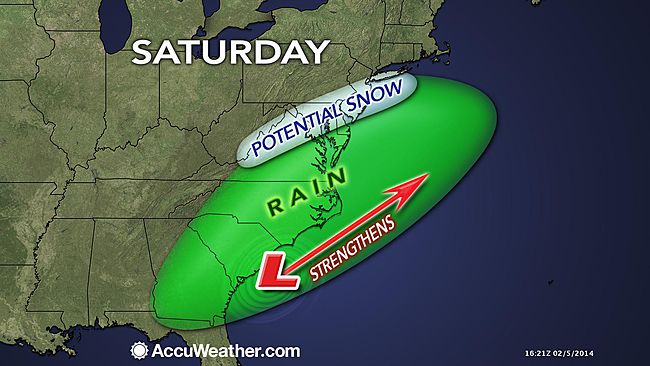 Recall that a similar sneaky storm brought over 6 inches of snow to parts of the Northeast this past Monday.

According to Senior Meteorologist Mark Mancuso, “With so many storms on the playing field, the atmosphere may not have the energy available to allow the Sunday to Monday storm to become a major event until it has bypassed the United States.”

With this latter scenario, there would be two weaker storms, rather than one very strong system.

Either way, it appears another episode of travel disruptions and concern for daily activities will sweep from the Central states to the East Coast. 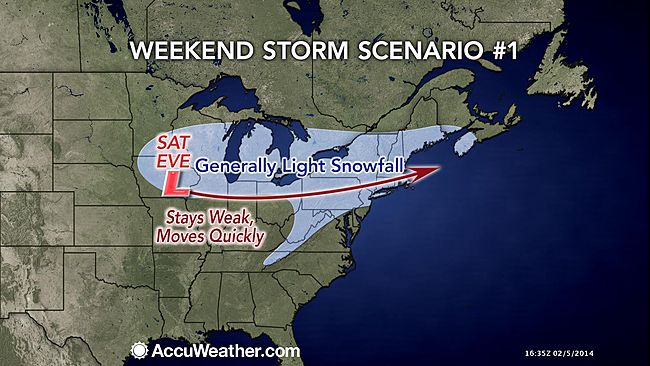 In both scenarios, rain would fall across the Deep South and some snow would sweep across part of the southern Plains during Saturday night and the Tennessee Valley and southern Appalachians on Sunday. A period of snow would also streak eastward across the Midwest cities of St. Louis, Chicago, Detroit, Cincinnati and Cleveland.

However, a stronger storm would imply more thunderstorm activity and a greater risk for severe weather in part of the Southeastern states.

For more on the coming winter storms and other weather forecasting go to accuweather.com